Advanced Millinery Feather Ornaments With Lynn McMasters
The workshop was held at the Lacis Museum of Lace and Textiles in Berkeley and taught by Lynn McMasters.  The workshop focused on advanced techniques for recreating vintage millinery decorations from feathers.

I was delighted to be able to join the class; I had wanted to take a class with Lynn McMasters for a long time.  She has a wonderful website that is a great resource for costumers and I have used it as a reference several times.  www.lynnmcmasters.com

There were only 3 other students in the class, which allowed plenty of space and help on our projects.


Feathers, Feathers and more feathers
Lynn brought in a number of lovely hat forms with vintage and vintage reproduction hats.  She had several ornament examples, including actual antique feather ornaments for us to look at closely.  She started class with showing and passing around different types of feathers, explaining feather anatomy and how to determine left wing feathers from right.  She discussed dying techniques, how to “burn” the feathers with bleach and many techniques for shaping and making the most of feathers.

While there were 5 projects on the syllabus and mention of decorating 2 hats, this was a bit more ambitious than time allowed.  However, I did leave class with 4 usable ornaments, techniques for 2 more.  I also felt that the ornaments were quite challenging to make.  I don’t think I could have learned to make them as effectively on my own or from a book.


Faux wing from Duck Feathers
We were given a template for the wing shape, some crinoline, floral wire and spray adhesive.  We supplied duck wing feathers and turkey flats, both dyed to match.

At this point in class, I wondered why the heck I would need a faux bird wing.  Decorating hats with bird wings and even entire birds were very popular in the late 1800’s, early 1900’s.  In fact, the millinery trade was hunting exotic birds to extinction.  The Audubon society and legislation curbed the use of feathers to domestic species, which meant milliners needed to get more creative with dying, shaping and other techniques to make domestic feathers appear more exotic.

So again, since I make modern hats or Renaissance hats, what the heck am I going to do with this fake wing?  Then I saw the lovely boater hat that Lynn had a sample on – I can make fabric covered boaters!  And I started seeing fascinators on Pinterest with very large, dramatic faux wings.

We sorted the feathers into rights and lefts, and then arranged them by length, following a vintage piece Lynne brought in for inspiration.  I won’t lie, I was completely baffled by the template and how to get those feathers to behave.  I stalled and covertly watched everyone else.  But those ladies were magical feather magicians.  So finally I got my glue and stuck those tiny fidgety feathers on, and you know what?  They looked pretty good. 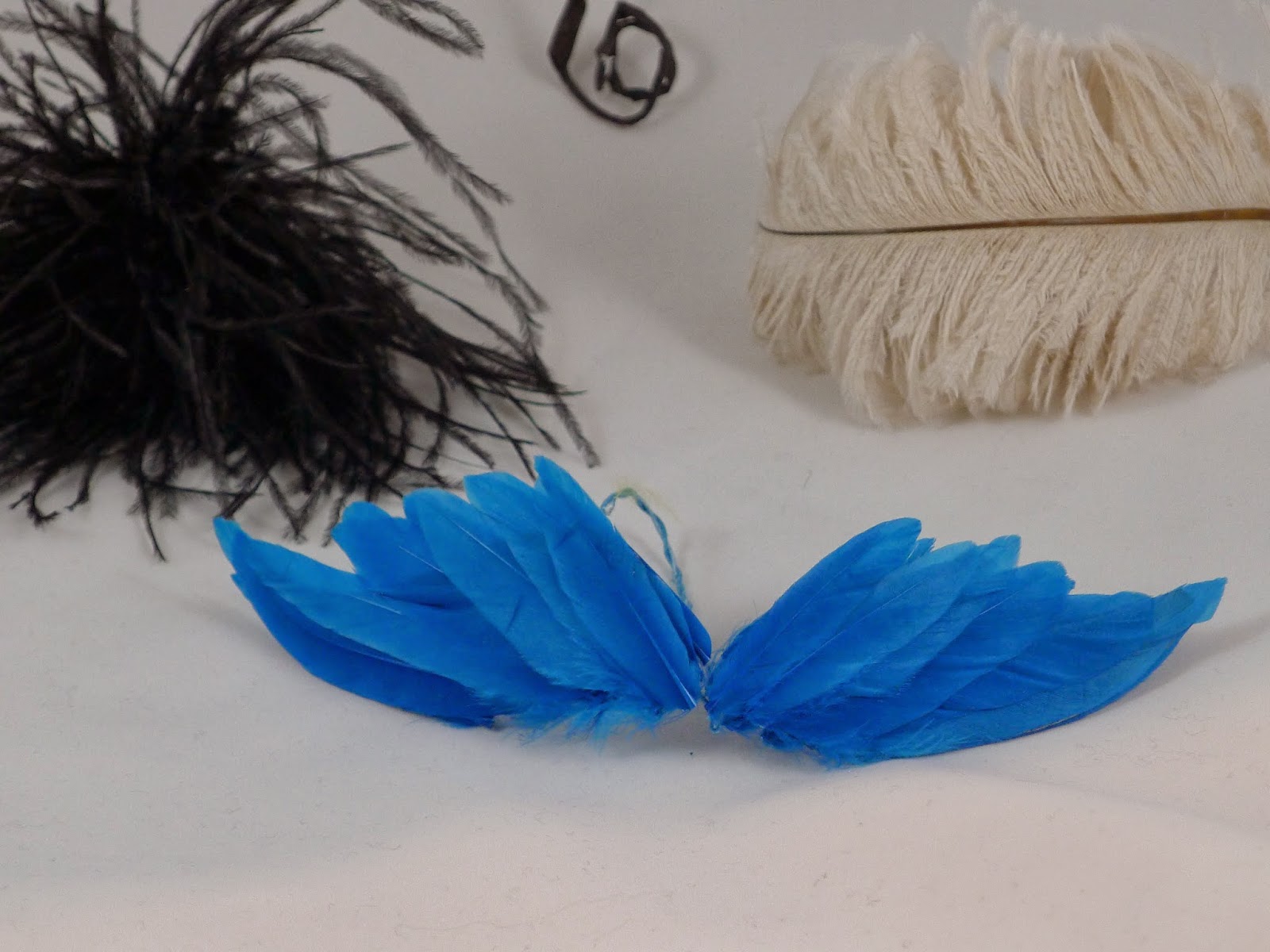 I used some really vibrant turquoise duck wing feathers from Lamplighter Feathers.  I have enough left over for several more wings.  Which is good, since more practice is definitely needed!

I did not have time to attach the turkey flats to the leading edge of the wing, but I will get around to it in the next few days.

In my next post, I will talk about making pompoms and a feather spray with a curled quill in the same class.
Posted by Unknown at 11:17 AM